How to present a village / house / place for acting, all in one. How to handle a piece of cloth. How to find your way through the third dimension of stage setting... all in this film.

Fagottron remixed, a delight each and everyone of them!

HEY, I'VE GOT YOUR STUFF

The brilliant French television producer Remi Gaillard needs no introduction, the average internet user has probably already seen one of his jokes. It's been a long time since we last heard of Remi, but that doesn't mean he has lost his sense of humor. You are warned! French parking lots and a godfather-like figure? Let's just hope it's Remi!.

One would think, yet another architectural deforming projection, well it is, but a very recomendable one. Commemorating the 600 years anniversary of the astrological tower clock situated at Old Town Square in center of Prague.

The 600 Years from the macula on Vimeo.

DON'T BE TIED UP ABOUT IT? 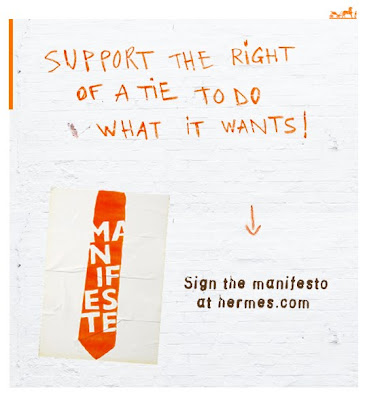 As a politically engaged graphic artist and designer Gerd Arntz (1900-1988) portrayed the world in wood and linoleum cuts. During the 1920s, he conveyed his vision on social wrongs and the rise of Nazism in Germany in his prints. He did this in such a simple, direct style that anyone - regardless of their education and nationality - was able to understand his images. This prompted the Viennese social scientist Otto Neurath (1882-1945) to ask him to design the symbols for the ’International system Of Typographic Picture Education’ (ISOTYPE). During his long career, Arntz made more than 4000 coherent, powerful and legible symbols and figures. We still see their traces around us on a daily basis: in pictograms featured on objects ranging from traffic signs to gameboys, and in information graphics.
This book displays many Isotypes and explains the system and its context. This overview of Gerd Arntz’s life and work includes a selection of his political prints and other rare visual material that was never published previously. With contributions from Flip Bool, Gert Dumbar, Mieke Gerritzen, Nigel Holmes, Max Kisman, Paul Mijksenaar and Erik Spiekermann.

André Putman, designer / stylist has finally got her overview in the Paris. More a kind of eighties icon, that reintroduced art-deco into the world in a new and stylish, often black and white, fashion. Known for her big studio lamps, black and white tiled bathrooms and love of Jean Michel Frank succeeded to turn this all into a typical 'Putman Style', now on show in the Hotel De Ville. 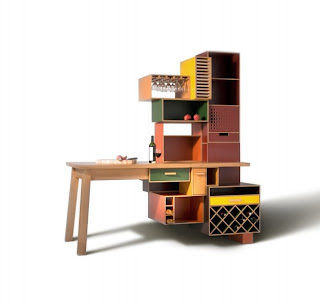 Now a new material made of wood, hard [and said to be cold] as stone makes it possible to cut your bread on the kitchen table.
Gepost door CONCEPTUALIST op 10:46

Holidays on the way... take a look at the totally inspirational work of Photographer [I'ld say also stylist] Fabrice Fouillet. The pictures come from his agent, Florence Moll. For closer looks at his work, see his own website Fabrice Fouillet - Photography. 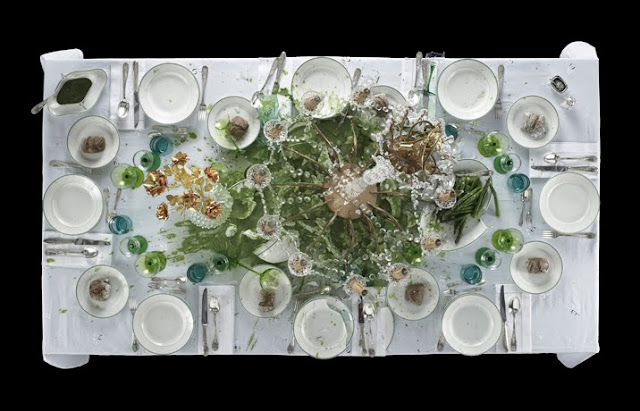 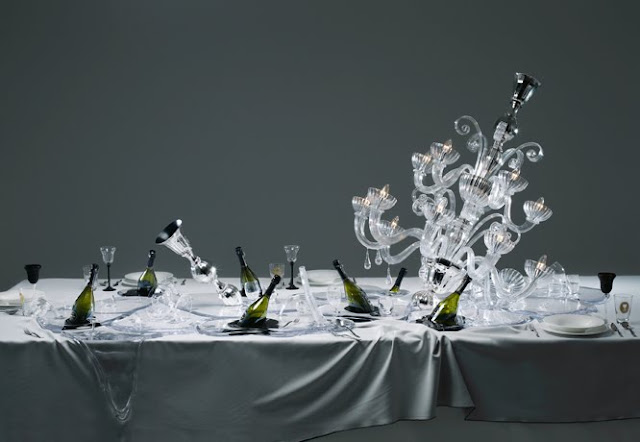 Let's have a look...
A year ago Conceptschool posted these themes as a possible development for 2010. The year being almost over and done with, what came to us and what did not? 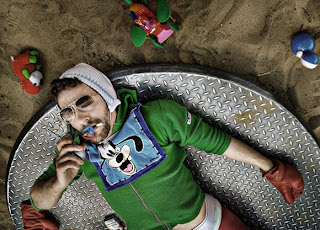 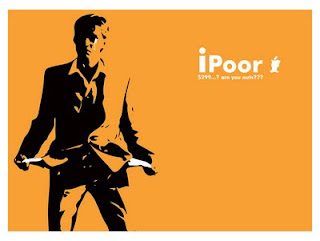 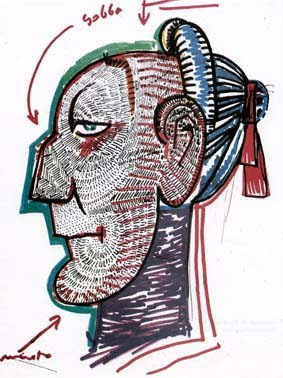 [link to an exhibition on Fellini's Casanova in Salzburg]

As for myself, I always willingly acknowledge my own self as the principal cause of every good and of every evil which may befall me; therefore I have always found myself capable of being my own pupil, and ready to love my teacher."

Commemorating the great film of Federico Fellini and the wonderfull film score of Nino Rota.

FREE THE ARTIST WITHIN...

Free the artist within. Free it to bring joy everywhere . .

To tell the truth, I found this quote in dutch: "In elk van ons zit een kunstenaar gevangen. Laat hem vrij om overal vreugde te brengen."
It's from: The Conquest of Happiness of which I found an integral text on the net: 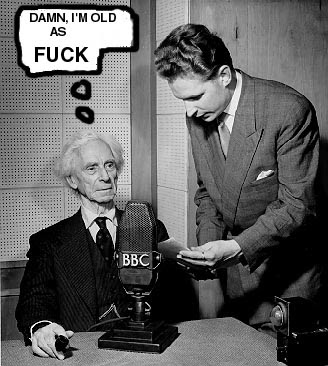 That's him, B. Russell 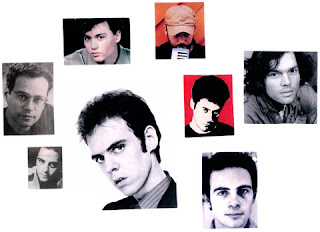 Jan Rothuizen Amsterdam based artist. His drawing of the workspace of mayor Job Cohen was part of the 'Zachte Atlas van Amsterdam' [soft map of Amsterdam.
Here presented is the project 'Somewhere over the Rainbow'. A selfportait without the self.
It contains a collection of pictures of men, selected because of a discovered resemblance, not just at this moment, but also in the past... and even presumed elements of the future.
Chronologically exposed they form a vision of an imaginary life. Starting as a baby and ending as an old man.
http://janrothuizen.nl/
Gepost door CONCEPTUALIST op 13:34 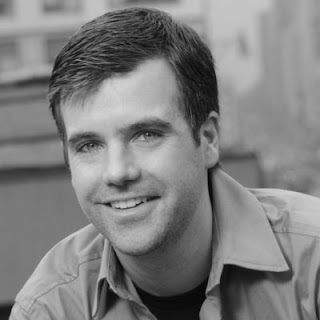 Charlie Todd is the founder of Improv Everywhere, producing, directing, performing, and documenting the group’s work for over eight years. He is also a teacher and performer of improv comedy at the Upright Citizens Brigade Theatre. Charlie is the author of Causing a Scene, a book about Improv Everywhere published by Harper Collins.
Charlie Todd was born in Columbia, South Carolina and went to school at the University of North Carolina at Chapel Hill. You can get in touch with him via this contact page.
Charlie Todd maintains a personal blog and a personal twitter account.
You can book Charlie Todd to speak at your school, conference, or corporate event.
This page was written in the third person because Charlie Todd would like it to show up first when someone Googles “Charlie Todd.” Numerous films to be found on YouTube...
Gepost door CONCEPTUALIST op 03:12 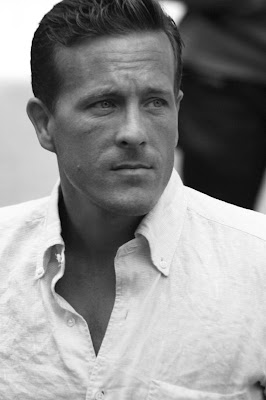 I started The Sartorialist simply to share photos of people that I saw on the streets of New York that I thought looked great. When I worked in the fashion industry (15 years), I always felt that there was a disconnect between what I was selling in the showroom and what I was seeing real people (really cool people) wearing in real life.
Before The Sartorialist I worked in sales and marketing for high-end women’s designer collections like Valentino and distribution companies like Onward Kashiyama, which at that time represented designers like Helmut Lang and Jean-Paul Gaultier. Eventually I opened my own showroom specializing in sales and press for young designer collections like James Coviello and Peter Som. I loved the challenges of merchandising, promoting and brand building for a new designer. Working on the fashion shows was a blast; I understand why fashion designers can become so addicted to the rush of fashion shows.

Shortly after 9/11 I closed my showroom and began focusing more on photography. I didn’t want to become a “fashion photographer” but I knew somehow that my loves of fashion and photography would eventually merge. I just never guessed it would be in the form of a blog. 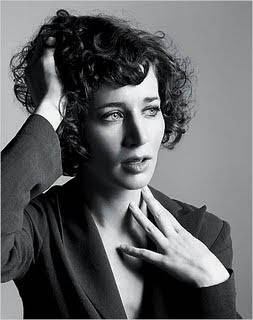 Miranda July is a filmmaker, artist, and writer. She wrote, directed and starred in her first feature-length film, Me and You and Everyone We Know (2005), which won a special jury prize at the Sundance Film Festival and four prizes at the Cannes Film Festival, including the Camera d’Or. July’s videos, performances, and web-based projects have been presented at sites such as the Museum of Modern Art, the Guggenheim Museum and in the 2002 and 2004 Whitney Biennials. Eleven Heavy Things, her interactive sculpture garden, was featured in the 2009 Venice Biennale. Her collection of stories, No One Belongs Here More Than You, was published in 2007 and won the Frank O’Connor International Short Story Award. It has been translated into 17 languages. She lives in Los Angeles, where she is working on a new movie entitled The Future. John Beebe, a Jungian analyst in practice in San Francisco, has been writing and lecturing about popular culture for thirty years. Concentrating particularly on the American cinema, he has demonstrated how archetypal patterns shape not only the scenarios but also the directorial styles that are most characteristic of our country’s canon, from the showcases of the great silent comedians, through The Wizard of Oz, film noir, the Hitchcock and Welles classics of the forties and fifties, and such auteur masterpieces as Letter From an Unknown Woman, The African Queen and Rebel Without a Cause, and on to contemporary classics like Broadcast News, The Grifters, Schindler’s List, and Brokeback Mountain. Jungian psychological themes Dr. Beebe has identified in American film include humiliations of the body, the trickster’s role in individuation beyond the hero, the interplay of integrity and synchronicity, and the comedy and drama of competing types of psychological consciousness. His most recent book, co-authored with fellow analyst Virginia Apperson, is The Presence of the Feminine in Film, now available in paperback.
LINK: Miranda July
_______________________________________________
Gepost door CONCEPTUALIST op 13:18

DRAWING ON THE RIGHT SIDE OF THE BRAIN 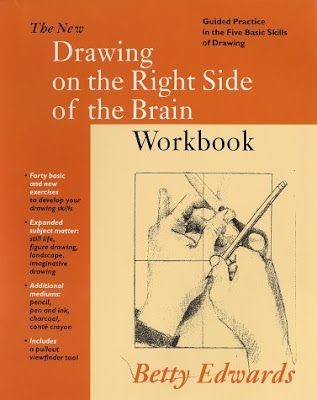 "You have two brains: a left and a right. Modern brain scientists now know that your left brain is your verbal and rational brain; it thinks serially and reduces its thoughts to numbers, letters and words… Your right brain is your nonverbal and intuitive brain; it thinks in patterns, or pictures, composed of ‘whole things,’ and does not comprehend reductions, either numbers, letters, or words."
From; The Fabric of Mind, by the eminent scientist and neurosurgeon, Richard Bergland. Viking Penguin, Inc., New York 1985. pg.1
Betty Edwards invented Drawing on the Right Side of the Brain. She thought up terms like: L-en R-modus modus... Read about it in the pretext of her book.
Gepost door CONCEPTUALIST op 22:36

the rise of the rest

No, the Rise of the Rest doesn't mean the End of the West. 'Established' markets and brands will not succumb or shrivel; the South Koreans, Japanese, Swiss, Brits, Americans, French, Germans, Norwegians, Canadians, Australians and Singaporeans will continue to forever add to the innovation pile, too.
In fact, to overlook the quirkiness, creativity, heritage & provenance, chicness, clean(er) air, freedom, joie de vivre, scientific breakthrough, societal innovation and cultural exuberance found in the 'Old World', North America, Japan and South Korea, would be a grave mistake. Many of these countries will find themselves in the top ten of happiness and quality of living indices for many years to come.
Gepost door CONCEPTUALIST op 09:38

Wonderfull wallpaper Ideas by Deborah Bowness / Do take a look into her world! 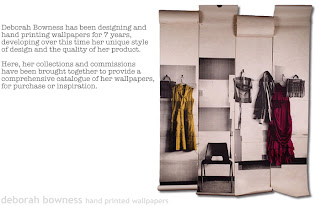 Reducing arts education also reduces the ability of a young person to resist negative messages that are embedded in music, visual arts, and poetic language. It is far easier to impress and sway a mind that is naive than it is to do so with one that has been educated and exposed to a variety of expressional forms.

I DON'T KNOW WHERE THIS CAME FROM BUT I DO AGREE!

In Antwerps M HKA  now, Craigie Horsfield photographer bringing his photos to us on gigantic tapestries, made in Flandres 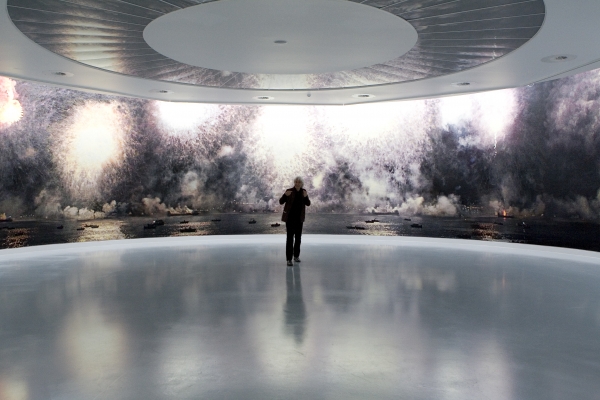 Just an update on Micheal Johansson [see his work, somewhere mid-october on this blog] See Michael talk an work...