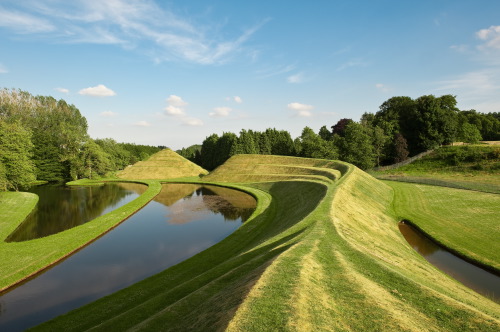 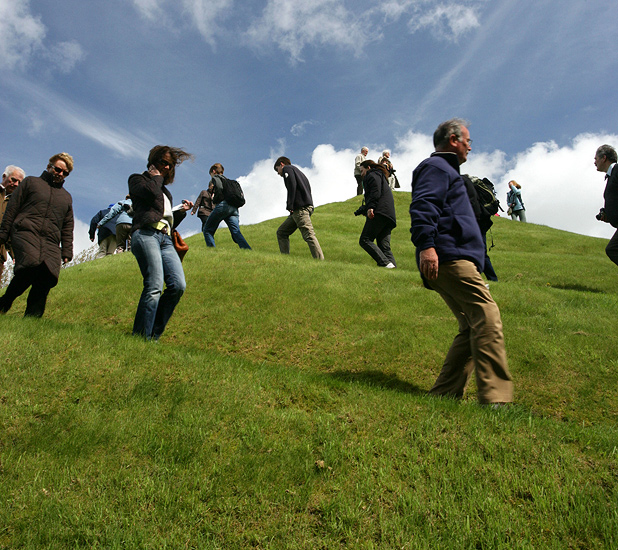 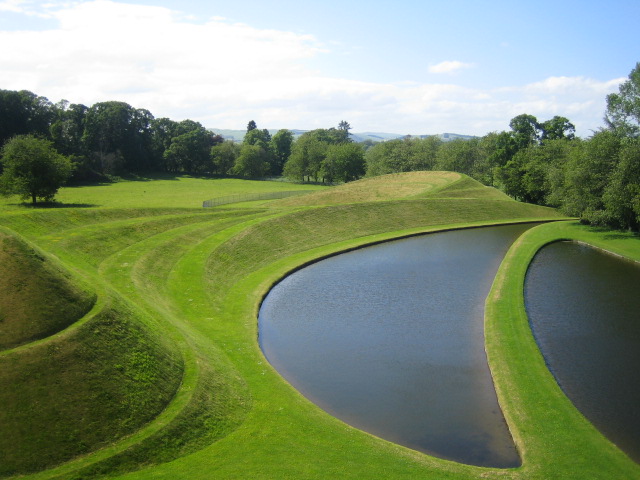 Charles Jencks Garden Of Cosmic Speculation.
Charles Jencks has been making the most interesting postmodern garden in Britain. Jencks, as the leading theorist of postmodernism, has a strong theoretical base
Apart from its striking visual character, the most interesting thing about Jencks Portrack garden is the way it carries forward the ancient project of making gardens which imitate (mimesis) the Nature of nature. Jencks seeks to understand the nature of the world, through science, and to embody the nature of the world in a garden design. The pharaohs, Plato, the emperors of China, Alberti, Capability Brown, William Robinson and Charles Prince of Wales  had the same intention. The results differ because their understandings of nature differ.
One criticism I have heard of Jencks’ Portrack Garden is that he is too literal in his ‘imitations’ of physical and chemical laws, principles and formulae. While not seeing this as a fault, I agree with the observation. The alternative would be to use the revelations of science as Jencks’ renaissance predecessors used optics and mechanics to produce remarkable visual effects and devices in gardens. Outside the garden realm, one of the most dazzling examples of what might be done, from the nineteenth century, is the Foucault Pendulum, demonstrating the rotation of the earth. “The direction along which the pendulum swings rotates with time because of Earth’s daily rotation. The first public exhibition of a Foucault pendulum took place in February 1851 in the Meridian Room of the Paris Observatory. A few weeks later, Foucault made his most famous pendulum when he suspended a 28-kg bob with a 67-metre wire from the dome of the Panthéon in Paris. The plane of the pendulum’s swing rotated clockwise 11° per hour, making a full circle in 32.7 hours.”  It is not too late to be making Foucault Gardens, Foucault-inspired gardens and other gardens inspired by a scientific understandings of Nature.